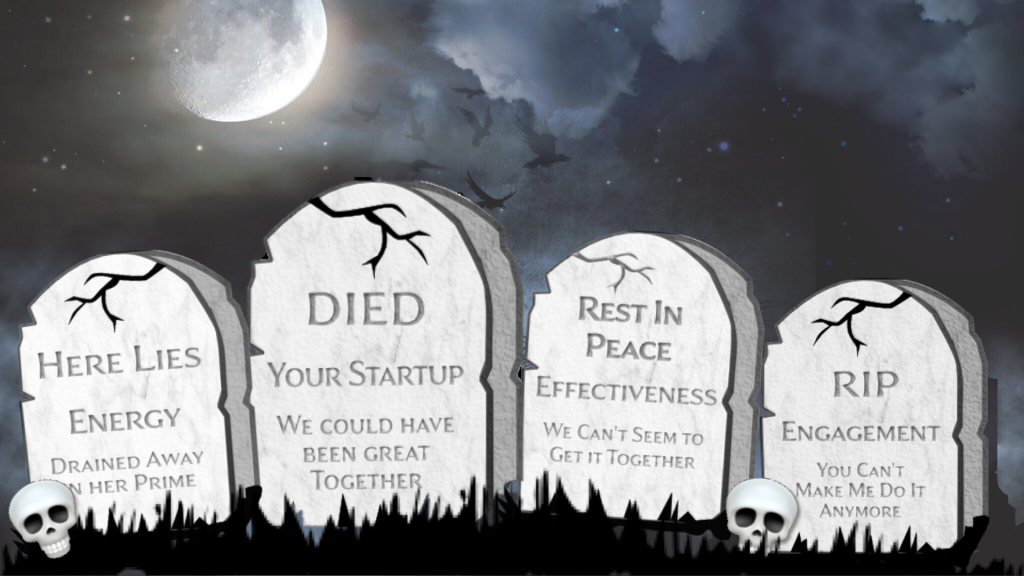 In the medical world, “silent killers” are conditions with no obvious symptoms which progress to an advanced stage before someone discovers them. In organizations and on teams, a lack of psychological safety, unconscious bias, and low trust are “silent killers” that slowly drain away energy, engagement, and the human spirit — often going undetected until the damage becomes irreparable. Ignoring these silent killers is toxic for teams and life-threatening for startups.

I had a ringside seat within two failed startups. What those two startups had in common was great potential, solid investor backing… and leaders who ignored the people dynamics and the impact of their own toxic behavior. They couldn’t (or refused to) see the behavioral and relationship issues that were slowly killing their team’s energy and engagement — and ultimately led to the demise of the fledgling startups. I’ve had dozens of conversations with entrepreneurs in which these same stories repeated themselves. These themes are so common, you can find them throughout two compendiums of failed startup narratives that make for some slightly depressing but revealing reading, especially when you view the stories through the lens of people’s behavior:

Nothing will kill your startup faster than partnering with or hiring the wrong people, and failing to develop and sustain strong, trusting relationships. Yes, there are a few high-profile examples of companies that raise massive amounts of money and grow to claim ‘unicorn’ status despite toxic cultures. But few startups are Uber.

In organizations and on teams, a lack of psychological safety, unconscious bias, and low trust are “silent killers” that slowly drain away energy, engagement, and the human spirit. Share via Twitter
People are the most important, and least predictable, factor of any business. The right combination of experience and behavior among the founding team and early hires can vastly increase the odds of a startup’s success. Failure to ensure people share healthy values and a common purpose is like injecting a toxin into the team. As a co-founder and leader, one of your most important responsibilities is to develop and sustain healthy, trusting relationships on and across your teams as you scale the business. Unfortunately, it is too often a lonely pursuit. I’ve spent over a decade in Founder/CEO roles and I don’t recall a single instance of an investor or board member asking me about the health or quality of relationships among my direct reports or teams across the organization.

As I’ve worked with entrepreneurs and team leaders in recent years the behavior of investors and board members hasn’t changed much. The impact of that lack of attention to a critical business risk factor is subtle and dangerous. When every question revolves around growth in the user base, revenue, and operating metrics that’s where our attention goes. Without obvious symptoms, and no metrics, people issues can progress to that point of being either irreparable or requiring a disproportionate amount of leader attention.

Prevention is the Best Medicine

Preventing toxic behaviors before they become silent killers begins with recognizing that your organization is at risk. Startups are risky to begin with. When you place a group of people into a cauldron full of aspiration and hope, mixed with stress and disappointment, then stir in money and rapid growth, the dark side of people’s desires and the effects of stress may begin to boil up and over. The key to prevention takes a page from the cookbook of every extraordinary team.

The old cliché goes, “A team is only as strong as its weakest link.” Today’s teams and organizations are made up of complex often virtual networks, not single linked chains of command and control. That makes the silent killers that slowly destroy people’s energy, engagement, and the human spirit even more difficult to contain and eliminate. The ‘how’ begins with acknowledging the risk then being obsessed with feedback and continuously measuring what really matters – relationship strength on and across your teams.

As Peter Drucker noted, “If you can’t measure it, you can’t improve it.”

This article is based upon excerpts from my book, Team Relationship Management: The Art of Crafting Extraordinary Teams. Get a signed first-edition copy today! Use code SHIPFREE2019 to get free shipping within the continental US.

The One Habit blog is brought to you by Xmetryx.

Xmetryx TRM Tools for Team Leaders significantly reduce risk and improve effectiveness and wellbeing by measuring relationship strength on and across teams. Whether you’re scaling a startup or leading a global team, you can’t improve what you’re not measuring. Xmetryx TRM is radar for your team – measuring what really matters.

Try Xmetryx TRM with your team today for free!

Dr. Jeb S. Hurley is co-founder and CEO of Xmetryx. Jeb’s career journey in the tech industry began in sales and product management. Over the past 25 years, Jeb has held GM, VP, and CEO roles at companies ranging from Fortune 100 to startups and has co-founded three software companies. He holds a Doctorate in Business Administration in Organizational Leadership with a research focus on human motivation and team effectiveness, along with MBA and BSBA degrees. Jeb is the author of Team Relationship Management (2019) and The One Habit (2017), along with over 70 articles on team behavior and leadership.
View all posts by Dr. Jeb Hurley →

This site uses Akismet to reduce spam. Learn how your comment data is processed.

In these challenging times, leading with trust – and helping each person feel secure, safe, and supported – is the key to reducing stress, building inclusiveness, and inspiring peak performance.

Team Relationship Management is a guide for conscious leaders – anyone who understand the importance of trust and its connection to performance.

Get this essential guide on Leading with Trust today on Audible!

In this 1-Hour Webinar, Dr. Hurley combines insights from behavioral science, his research with teams from around the world, and decades of leading remote teams to give you the three steps to inspire trust and peak performance on your team.

Search Articles by Keyword or Category